​Congratulations to Valeria Appel whose short has won Film of the Month on Shooting People.  Locked In is the story of an ordinary family whose day takes a very disturbing turn. View it here and feel free to give it five stars!

Valeria has taken a number of Euroscript courses and says they taught her a lot. She's currently working on the Chris Tarrant series for Channel 5.  She’s produced a one-hour feature for Al Jazeera English – watch it here:  youtu.be/jv69pYSm2oo

Pre 2016 she worked with Bear Grylls and Sir David Attenborough. Thanks to her TV work she has travelled to wonderful locations like Galapagos, Thailand, Malaysia, Qatar, Argentina (including the Patagonia).  She is fluent in four foreign languages and is passionate about film. You can see more credits on IMDB. 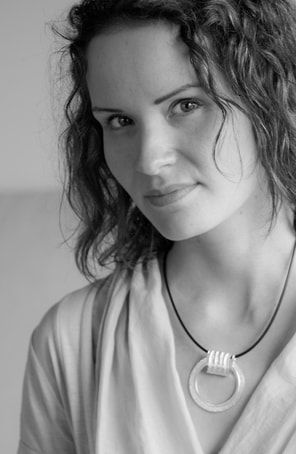 After development sessions at the Tampere Film Festival and further mentoring from Ian Long, Finnish screenwriter Petra Forsten's drama Home Truths has been chosen for the POWR Baltic workshop, so will have a showcase pitch at the biggest film market in North Eastern Europe - a useful step towards production.
​SCREEN MAGIC
TASTING BLOOD
​SEEING STARS
GIANT IMAGES
BAFTA SLEEPS WITH THE FISHES

Euroscript screenwriter James Walker won a BAFTA for Best Animated Short for producing Sleeping With the Fishes, about a lonely fishmonger more at ease with her fish than her customers. To watch it, ask here for the password.

GETTING THE URGE
Brian Barnes' "The Urge" written after attending Fenella Greenfield's Write a Short in a Day workshop - has spent a full year as the IndieFlix 8th most watched horror film. He says, "I'm very proud of my cast and crew, and very grateful to Fenella for her tips.

"I took Fenella Greenfield's 'Write a 10 Minute Short in a Day' course. It took me 2 years to get the crew and location together to make that film, but I managed it. I then took Fenella's 'Script to Screen' course; she gave me ideas on how to make a trailer and website for the film, which has helped prepare for my current festival push. This is undoubtedly my best work, and it's due in some part to what I learnt through Euroscript, so thank you."
​Daf Palfrey Treatment Success
Daf writes: "I wrote a treatment after I took Exciting Treatments. I don't know if you remember, but it was an idea based on the life of a medieval Welsh poet called Dafydd ap Gwilym. It was also a hip-hop musical.

"Daft, I know! But after a couple of drafts of the (exciting!) treatment, the Film Agency for Wales thought it good enough to develop into a feature film screenplay. So, they put some money my way and I'm currently writing up the first draft.

"Even though the Exciting Treatments course was just a day long, I got a hell of a lot out of it. I think it's because we were made to write and come up with ideas in a workshop environment and didn't have time to ponder or brood over our ideas. Also, the generalization/sequence/specific action rule was very handy when writing out the treatment. Thanks for that! Don't think the treatment would have been half as good had I not attended your course.

"Anyway, the project is currently called '﻿﻿Superstar Bard﻿﻿' and I will be directing it through production company Fiction Factory in ﻿Cardiff﻿."
Penny Macleod
Penny is developing her script Toy Boyz Inc with the production company Green Gaia Films, after pitching her film idea to producers at Cannes and a re-draft incorporating Charles Harris' feedback.

Peter Lowe
Peter has completed the indie feature SE1 (aka Evans Baby), which tells the tale of teenager Evans' struggle to cope with fatherhood and responsibility. With no job and little money, Evans falls into dealing drugs; but when his stash is violently taken from him, he is forced to re-evaluate his life's choices. SE1 will get its DVD release on February 27th ﻿through﻿ Brightspark Ltd and Lace Media.

Simon Morgan
"Following a week at Charles Harris's Screen-PLAY Summer School, three scripts were commissioned by a US client looking for to market films aimed at the immigrant community. As well as developing further ideas I'm in discussion with a BAFTA Award-winning writer/producer who is interested in my horror project."

Stephen M. Hunt
"My first feature film ﻿Beliefs, Myths and Curses ﻿has been optioned by small, Brighton-based Avanti Productions with a view to it being the follow-up to their first co-produced feature film Dora. Brian Blessed and Hildegard Neil are attached to my second feature film Hearts of Cold Stone which is about the WW2 massacre of a French village. My work-in-progress is a hard-nosed chick-flick called Make Up. Attached to this project is Romanian star Mihai Arsene (The King's Speech, Martin Scorsese' s Hugo, Cabret andAnna Karenina)."

Steve Redwood
"In 2011 my short story Man or Mouse won the Writer's Forum short fiction prize. It was subsequently optioned as a feature film by a BAFTA nominated producer."

Andersonkeys
"I finished my fourth spec script and have started No.5 and 6. I still get excited as I sit down at my computer."